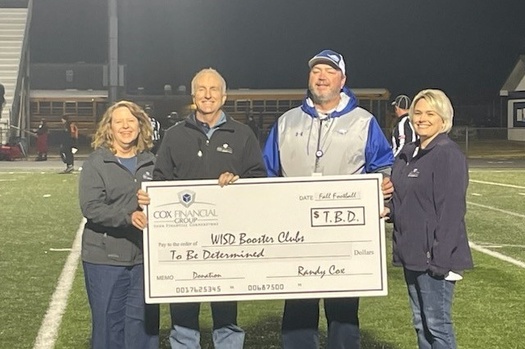 For the sixteenth season in a row, Cox Financial Group sponsored the $100 for touchdown program. Donations have been made to the booster clubs for Football, Band, Blue Belles, and Cheer. To date, Randy has given over $50,000 to this program! 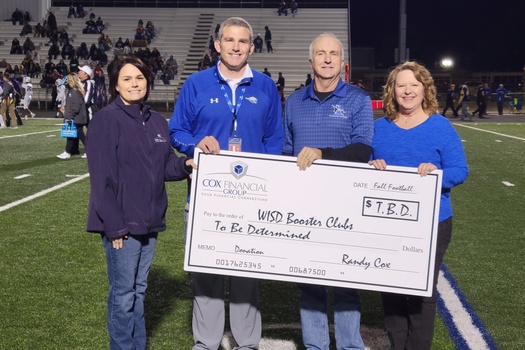 This is the fifteenth season for CFG sponsoring the $100 for touchdowns programs.  Donations have been made to the Football, Band, Blue Belles, and Cheer booster clubs. Randy loves to support local charities and the schools!

Cox started donating with his former business partner because his wife and daughter are both teachers and because his kids graduated through WISD.

“It kind of started under the concept of scriptures teach, that God loves a cheerful giver, and we just thought there’s no more hilarious way than to let the kids decide how much money I’m giving with how many touchdowns they score,” Cox said. “It’s just become bigger than me, and it’s been this program that’s gone on, and it’s for great causes. We help the Education Foundation and these four booster clubs. It’s such a good thing.”

Cox said this year was particularly fun because of the great football season.

“It’s kind of the talk in the stands and of the town. People see me and they’re like, ‘Oh my gosh, they’re costing you money this year,’” Cox said. “God has blessed me and my company. Why wouldn’t I do that?”

Cox’s goal is to assist the programs so they can do what they want and afford wants and needs, he said.

“We try not to charge our band members huge fees in joining band,” Don Carlos said. “We want to make band affordable for all students, and so in doing that we try not to charge them a fee every year, like some districts do. We just try to keep it very minimal, so that leaves us to have to fundraise and find donations from businesses and things like that, so the fact that [Cox] does that is just amazing.”

Blue Belles Booster Club President Tamra Gutierrez said the money raised goes toward costumes, guest choreographers, meals for the team and props for performances. Community support for the Blue Belles is also meaningful for the arts in Weatherford.

“Everyone has their niche in high school, and Belles is something that supports leadership as well as dance and so it’s great to have someone support the arts in those types of groups as well, like the Belles,” Gutierrez said. 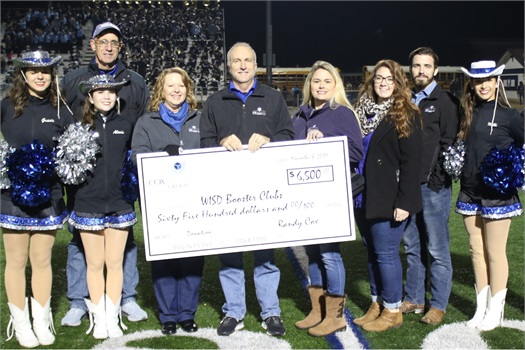 This is the thirteenth season for CFG sponsoring the $100 for touchdowns programs.  Donations to the Football, Band, Blue Belles, and Cheer booster clubs have now totaled almost $40,000.  Randy loves to support local charities and the school (he appreciates teachers since his wife was one and his daughter is now). 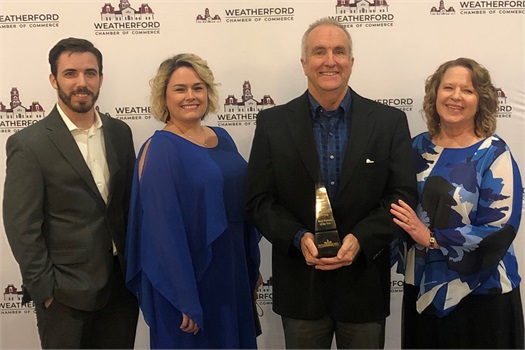 Cox Financial Group is awarded Small Business of the Year

Cox Financial Group was named the 2019 Small Business of the Year at the 99th annual Weatherford Chamber of Commerce awards banquet on Tuesday, October 1, 2019.  It is an award based on community involvement and giving back to the community and how you have overcome challenges that small business face.  We were honored and humbled to win the award, and we know that it is because of our great clients that allows us to do what we do.  We thank God the Father for His blessings.

The 2019 Small Business of the Year Award from the Weatherford, Texas Chamber of Commerce is granted independently and determined by members of the community.   There is no ranking involved in the award. The award is not financial market related nor is the winner chosen by existing clients. The award should not be construed as an endorsement of the advisor by any client nor are they representative of any one client’s evaluation. 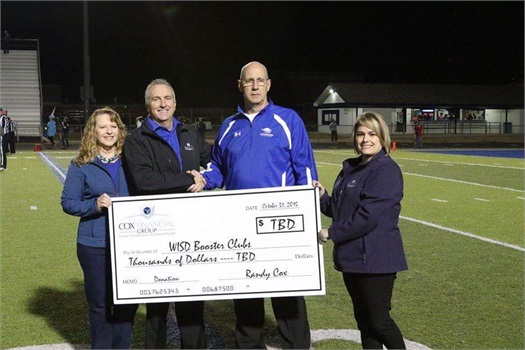 In 2007, Randy Cox began donating $100 for every Roo varsity touchdown scored during the regular season. The Roos have scored more touchdowns this season than any of the previous seven seasons! The Roos hit a milestone at Friday's game against Arlington Bowie when they scored their first touchdown in the first quarter (and 35th touchdown of the season), bringing the total to 200 touchdowns and $20,000 donated over the last eight years!

Weatherford ISD Superintendent Dr. Jeffrey Hanks accepted the record-breaking check for $3,500 in a special on-field ceremony between the first and second quarter of Friday's game. 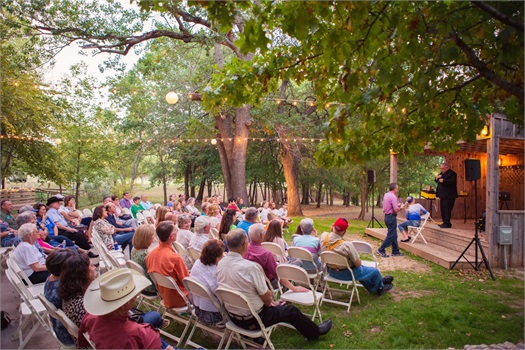 Many of our clients came out to help us celebrate. AJ’s Catering served mouth-watering burgers with all kinds of fixings, and guests were treated to strolling magic and a magic show by Joe Presto. We want to express our sincere gratitude to all our client friends who have made the last 20 years so successful and so enjoyable! 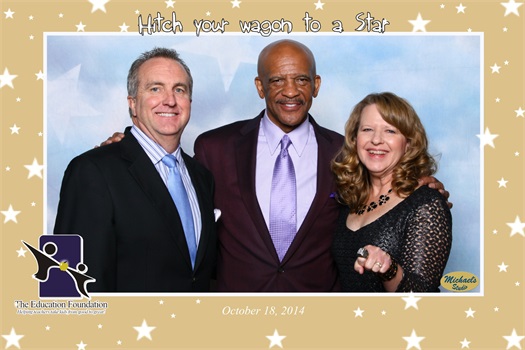 The WISD Education Foundation started in 2000 as a way to enrich the educational experience of our children. Since its beginning, the Foundation has given over $850,000 to WISD teachers to fund unique and innovative teaching programs. The Foundation’s School Supply Closet furnishes supplies to students in need and serves over 1,000 students annually.

On Saturday, October 18, the Education Foundation hosted its Annual Gold Star Gala at the Omni Fort Worth Hotel. The event kicked off with a social hour, during which guests were invited to browse the silent auction area. Guests were then treated to a wonderful dinner and an inspirational message from former Dallas wide receiver Drew Pearson. A live auction followed and guests had an opportunity to meet and greet Mr. Pearson. Shari Cox shows off Drew Pearson’s SuperBowl ring during her and Randy’s photo op. 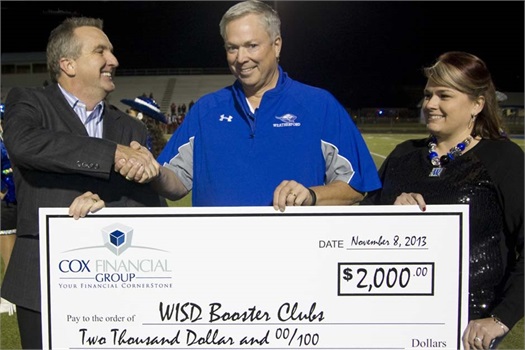 For the past seven years, Cox has donated $100 for every touchdown scored by the varsity football team. Also, he has sponsored a $30 for three-pointers in the past.

In all, Cox has donated around $17,000 just through the TD program. However, when combined with donations to all WISD booster clubs and foundations, that number has reached over $45,000 since 2007 alone. 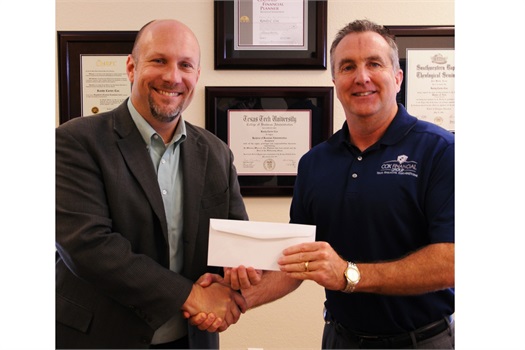 Anyone who’s been around Weatherford High School athletics for a while knows Randy Cox puts his money where his mouth is. And he doesn’t do it because he has to, it’s because he wants to.

Cox, owner of Cox Financial Group, has always believed in being a “cheerful giver” and does it without hesitation. “It makes me feel good to help others,” he said. “I am blessed with a lot of wonderful things God has given me and I want to share that with everybody I can.”

The overall number of what Cox has given embarrasses him but it is upwards of $50,000. Those funds help the students and staff of Weatherford ISD combat budget shortfalls. “With the way education is nowadays, it’s just hard [to keep some programs going],” Cox said.

This year, Cox extended his gift-giving to Weatherford College by donating $2,500 to a scholarship endowment. In turn, because of a Title III matching grant program, that $2,500 turned into $5,000 as every dollar is matched by the Department of Education. “Anytime you can double your impact on students, that’s a great opportunity,” said Brent Baker, WC Vice President of Instituional Advancement. “Randy is a great member of this community. He has been giving back for years…not just financially but also in time. He’s a true leader.”

Cox said he wanted to make sure people knew the gem they have in the community in Weatherford College. “My wife, Shari, and I love education and we wanted to do something and when Brent mentioned the grant - done,” Cox said. “The college is a treasure and does so much for our local students that it just made sense [to give].”

Since 2006, Cox has volunteered his time on the WISD Education Foundation Board as an active donor, board member and member of the executive committee. He and Shari have been active volunteers for WISD, contributing countless hours of support to PTAs, booster clubs and Project Graduation through the years.

Cox gives back to his customers as well. He recently held a dinner at the Doss Heritage and Culture Center in appreciation of his clients for not only trusting him with their finances but also for referring others to him. 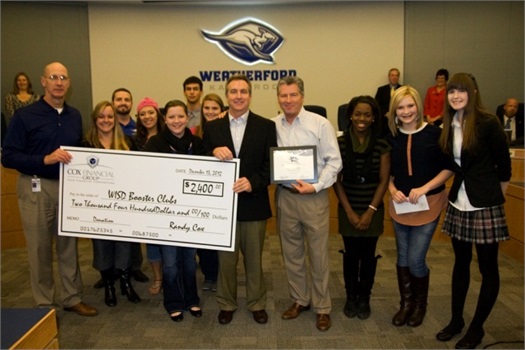 Since 2006, Randy Cox has volunteered his time on the WISD Education Foundation Board as an active donor, board member, and member of the executive committee. He and his wife, Shari, have been active volunteers for Weatherford ISD contributing countless hours of support to PTAs, booster clubs, and Project Graduation through the years. In the fall of 2007, Randy, and his partner at the time, initiated a program to support the Weatherford High School band, Belles, cheerleading, and football booster clubs by offering $100 for every touchdown scored by the Kangaroos. Randy set up a similar program with the Varsity Basketball booster club, offering $30 for each 3-point shot made by the Kangaroos. In six seasons, the donations made through these programs – with additional donations to the students and staff of Weatherford ISD – have totaled over $40,000.

At December’s WISD school board meeting, Randy presented $600 checks to the football, band, cheer, and Belles’ booster clubs, totaling $2,400 from touchdowns scored during the 2012 varsity season. 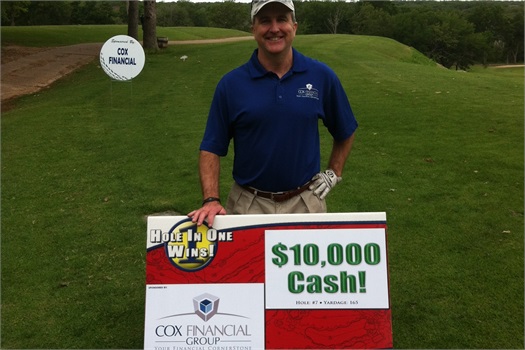 Randy Cox, CFP® of Cox Financial Group sponsored a $10,000 Hole-In-One contest as part of the Chamber Spring Swing Golf Tournament on April 12, 2012 at SugarTree Golf Club. This four-man scramble is one of community's largest golf tournaments, and it helps support the many community services provided by the Weatherford Chamber of Commerce. The weather was beautiful for a day of golf, and the players had a lovely time playing and networking. While no one got a hole-in-one, everyone sure had a great time trying! 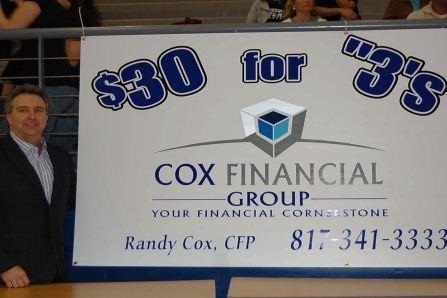 Weatherford, TX (February 10, 2012) Randy Cox, CFP® of Cox Financial Group is pictured with his sign displayed proudly in the Kangaroo gym. Recently, he generously donated another $3,000 to the boys and girls basketball booster clubs through his “$30 for 3’s” program. This tradition began five years ago by donating $30 for every 3-point basket made during district home games by the varsity boys basketball team. Randy does this in addition to donating $100 for every touchdown made by the varsity football team. Through these programs and other sponsorships, Randy has given well over $20,000 in the past five years to the booster clubs in support of the great work of WISD students and staff. 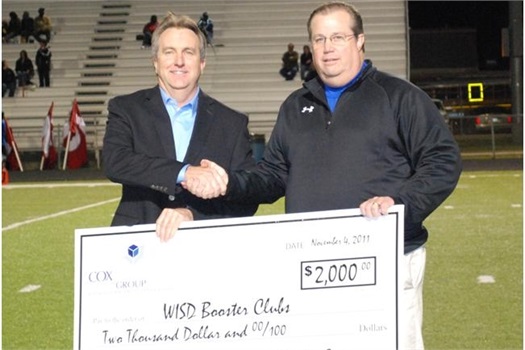 Weatherford, TX (November 4, 2011)  Pictured is Randy Cox, CFP® of Cox Financial Group presenting a check for $2,000 to WISD Executive Director of Athletics Philip O’Neal. This tradition began five years ago when Randy, at his previous company, created a fun and innovative way to give back to his community. He continues that tradition by donating $100 to the WISD Booster Clubs for every touchdown the varsity football team scores. This year’s donation will benefit the Blue Belles, Band, Football, and Cheerleaders. Cox Financial Group will once again be donating $30 for every 3-pointer the varsity Kangaroo basketball team scores. Randy’s comment was that Scripture says that God loves a cheerful giver, and this is one of the “funnest” ways to give back to the Kangaroo athletes and staff for all their hard work and dedication each year! 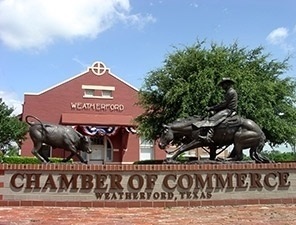 Member of the Weatherford Chamber of Commerce 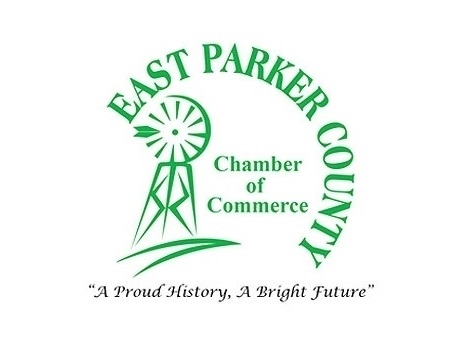 Member of the East Parker County Chamber of Commerce